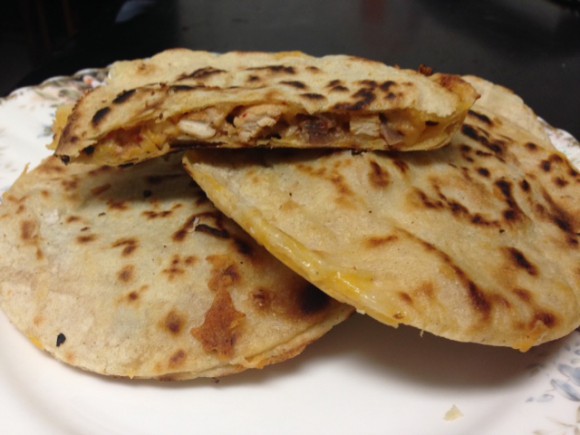 My boyfriend’s and my lingo for junk food is usually something along the lines of “hot garbage snack.” Because we know whatever dish we’re referring to at the time is about as nutritional as hot garbage.

But oh, so delicious.

For Super Bowl 50, which we planned to spend at our friend Jon’s house, I wanted to make a traditional hot garbage snack, but something with a twist. Scrolling through my Facebook Newsfeed, I found some inspiration in the form of one of those Buzzfeed recipe hack GIFs. The hack? Korean nachos.

Only a few problems. Jon doesn’t eat pork, I didn’t feel like buying a whole tub of sour cream just for a few cutesy dollops, and I had a bunch of corn tortillas left over from tacos.

So, I present “Korean-style” quesadillas (the quotes because I’m extra White):

Combine the chicken, garlic, onion, and tomatoes in a mixing bowl. Add the soy sauce, honey, chili flakes, and kimchi, then stir until the meat and veggies are completely covered in the sauce.

Throw a small pat of your fat in a pan over medium heat. (I used goose shmaltz for its high smoke point and deliciousness, frankly, but any oil or butter would suffice.) Add the chicken mixture and let it simmer until the chicken is cooked through and the veggies are soft, about 5 minutes. It should have let off a lot of liquid, for which you can use a strainer to drain. Leave the cooked mixture in a bowl.

Heat a new pan over medium-high and add another small pat of fat. Place as many tortillas as you’re able and let them crisp up for a couple of minutes while you add thick a layer of cheese, a few spoons of chicken, more cheese, and a sprinkle of scallions. Top with another tortilla and when the bottom has lightly browned, flip. Do not be alarmed if the pans begins to slightly smoke. Repeat the process about 10 times until you have a delicious-smelling stack of these hot garbage snacks.